A single lure licence covers the entire Sotkamo waterway lure fishing area between the cities of Kuhmo and Kajaani.

The best boat-launching harbours are at Sotkamo and Kajaani. Both boat harbours are spacious with ramps suitable for larger boats. The boat harbour in Central Sotkamo, on the shore of Lake Pirttijärvi, benefits from its excellent location in the heart of the lake area. Next door are Sotkamo city centre services and opportunities for refuelling. (Boat harbours are indicated on the joint lure fishing licence map) 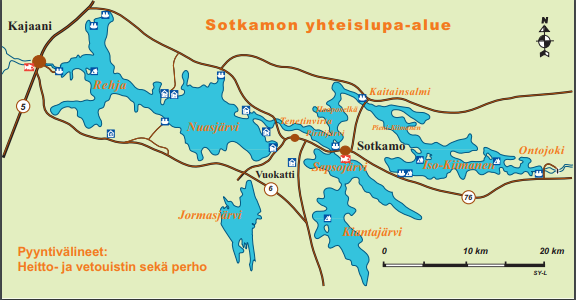 These are long expanses of open water. The waterway below them narrows into the Kaitainsalmi strait and continues on a slightly more mazy course until it reaches the Tenetinvirta strait. The uppermost boat ramp is just below the River Ontojoki. A further ramp lies on the southern shore of Lake Iso-Kiimanen next to a guided trail for shooting practice, indicated by a sign and diverging from the Sotkamo-Kuhmo main road 76. Another ramp is located next to the bridge over the Kaitainsalmi strait. Anglers may take a break in the lean-tos located on the southern shore and on two of the islands.

Roughly two kilometres long, the Tenetinvirta strait supplies plenty of food for fish. The strait is a splendid lure fishing ground, yielding a good number of pike, zander and trout. Grayling are also encountered there.

Lake Nuasjärvi and the open waters of Rehjanselkä form a continuous lake basin of almost 30 kilometres. Several travel businesses with boat harbours are located at the Vuokatti end, while lean-tos, rental cabins and camping areas can be found on the picturesque Rehja Island.A fair number of vendace and smelt are found in these lakes, hunted by predatory fish such as zander and trout. Lure fishers think the best trout grounds are in the eastern part of the lake, below the tree-covered eskers of Vuokatinvaara.

Nestling against Vuokatinvaara’s regimented eskers, this 10-kilometre-long lake provides a diverse lure fishing environment. With a large number of islands, islets and rocks, a lake depth contour map reveals interesting fishing grounds. The lake has several deep depressions and a number of narrow channels, 15 to 25 metres in depth, leading off in various directions.

Lake Jormasjärvi has four boat ramps. A sign in the village of Tuhkakylä points to the village bathing beach, which also serves as the public boat harbour. The beach has no ramp, but boats are launched from even sand that is solid underfoot.

Pike is the most common catch in this deep lake, while zander and trout are the most sought-after. Trout stocking has already been performed regularly in the rivers and lake for decades. The best fishing grounds are probably on the side of the lake closest to Tuhkakylä village.

The licence places no limit on the number of lures or rods. 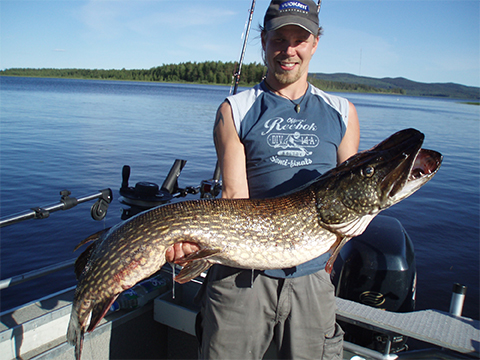 My first ten-kilo pike The maps below show excellent fishing grounds, with red referring to mostly pike and green to mostly zander!   Lake Nuasjärvi, located at the foot of…