Some 50 kilometres long and measuring slightly over 15,000 hectares, the labyrinthine Kiantajävi lake is a well-recognised fishing ground. The lake is regulated, but water in the summer usually remains at the maximum level. Fish stock has adapted over the decades to lake regulation. The lake sports a good vendace population, which in turn feeds the predatory fish stock that attracts lure fishers.

Trout and landlocked salmon also thrive in the Kiantajärvi lake in addition to pike, perch and whitefish. Zander is also becoming a natural part of the fish stock in the lakes of Suomussalmi. Lake Kiantajärvi is fed by several trout-bearing rivers whose salmonoids reproduce in the wild. The good catches of Lake Kiantajärvi, however, mainly result from regular fish stocking. Landlocked salmon has also been stocked in addition to trout, with good results. A 6.5-kilo catch, for example, has been identified as a six-year-old stocked fish. The salmon evidently thrive on the Lake Kiantajärvi vendace.

The most attractive lure fishing areas include the open waters of Kiekkiselkä and Horsmaselkä in the central and northwestern parts of the lake. Those looking for trout should head close to islands, headlands and the mid-lake shallows. Landlocked salmon, on the other hand, are often caught using topwater lures in the deep waters of the open lake. Larger pike are often found in the open lake, but should be fished a little deeper at around five metres.

There are boat ramps at regular intervals around Lake Kiantajärvi. A wilderness hut on Laitasaari Island out on the Kiekkiselkä accommodates 8 people and is always available.

Boat launching ramps and some tips for finding salmonoids

There are around a dozen boat ramps dotted about the lake. The most popular are: 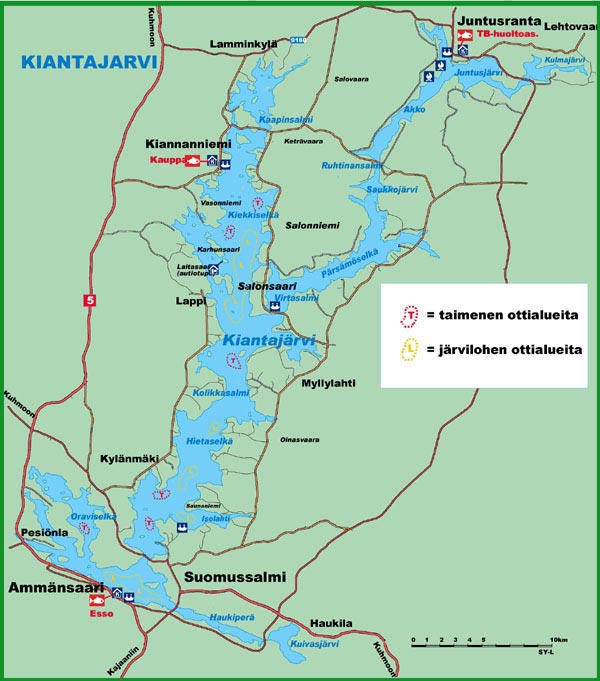 “If you want to learn how to lure pike, don’t go to Lake Vuokkijärvi. You’ll always catch plenty of pike there. You won’t learn any new skills. You’ll just think too highly of yourself because you’ll be catching fish all the time.” This is the advice of a competing lure fisher from Kajaani.

Half the Lake Vuokkijärvi shoreline is open, pine-dominated heath forest, while the other half is open bog. The lake is strongly regulated, changes in water levels having a strong impact on the shallow shores. The fish stock has adjusted to regulation over the decades, and the long, shallow-shored lake is a fantastic destination for pike fishers. The winning catches in lure fishing competitions often weigh more than 20 kilos.

The best pike luring grounds are found in the western parts of the lake, although the rest of the lake also compares well. Mid- or deepwater lures usually yield a catch in summer. In the dark waters of the lake, vivid wobblers, often yellow, are the most successful way to catch pike.

A substantial number of salmonoids are stocked in the lake each year. This shows in the catch statistics. Anglers have also observed migrant fish in the surrounding bodies of water. The zander has also made a home in lake Vuokkijärvi.