The waters of the large Saunajoki lake-and-river system, originating in the south-eastern corner of Kuhmo, fall under the control of two fishing associations. In the downstream reaches lie the water areas of the Lammasperä fishing association, while the upstream sections are managed by the Saunajärvi association. The larger of the two waterways gathers its waters from the Elimyssalo wilderness area, emptying into the Kiekinjoki. Another river, Kesselinjoki, flows from the south-east to join the Kiekinjoki. The combined river continues as the Kesselinjoki, although this is the name of the smaller of the two rivers. Another lake-and-river system begins in the south, in the Lake Saunajärvi area, flowing as the River Louhijoki into the River Saunajoki. There are practically no populated areas along these waterways. The area boasts dozens of rapids in a wilderness where one white-water angler will rarely come across another. A number of rapids in the eastern corner of Kuhmo, located in the vicinity of roads, are stocked with catchable-size fish; otherwise the streams have a natural fish population. 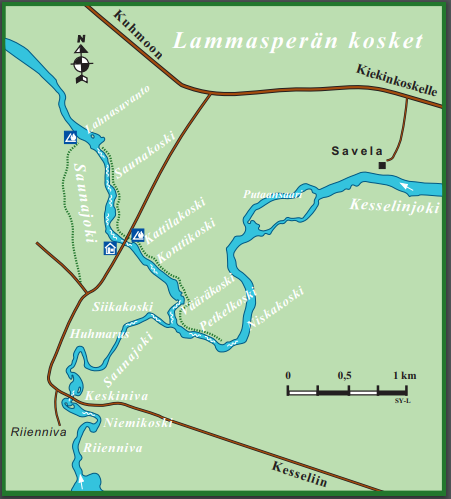 The northbound Saunajoki joins the westbound Kesselinjoki (Komulanjoki) in the Lammasperä area. The larger volume of the Kesselinjoki forms the main channel. Its headwaters extend to areas near the Russian border, from where the waters flow for dozens of kilometres in a number of rivers, including the Kiekinjoki and Kesselinjoki. Beyond the river confluence, the combined flow in the rapids is the third largest of all unharnessed rivers in Kuhmo.

The Lammasperä rapids can be reached by driving east along the Hukkajärvi road (road 9121) to Kiekinkoski for about 20 kilometres, and then turning right on to the road leading to Lake Lammasjärvi. A drive of around 2.5 kilometres will take the angler to the bridge across the Saunajoki river. At the head of the bridge there is a lean-to intended for anglers. Another lean-to for both canoeists and anglers can be found further down on the opposite bank, below the rapids by a pool known as Lahnasuvanto. Next to the bridge is a hut belonging to the local hunting club. Those interested in renting the hut should contact the fishing association.   The hut can accommodate up to a dozen anglers, who also have access to an adjacent ‘kota’ hut. In the rivers’ main channel, starting with Niskakoski, waters tumble down a series of varied rapids – Petkelkoski, Vääräkoski, Konttikostki and Saunakoski – with a combined length of around two kilometres. The stretches between the rapids contain pools with leisurely flows, forming comfortable lies for salmonoids.  The 20-metre-wide rapids provide fishing spots throughout their length, and in most places the angler can cover them casting from only one bank. The bridge is conveniently located midway along the stretch of rapids. Careful fishing from both banks and along the tributary will give the angler several days’ worth of exploring. The Lahnasuvanto pool terminates the section with rapids, after which the river flows smoothly into Lake Lammasjärvi. The Saunajoki flows north to join the main channel at Vääräkoski. At just 5 to 10 metres wide, Saunajoki’s water volume is clearly less than that of Kesselinjoki. Of the rapids located on Saunajoki’s lower stretches, Siikakoski and Huhmarus are regarded by many as being equal in fishing potential to those in the main channel.  The middle sections of the river flow steadily, while the upper reaches close to the road contain two short rapids with gentle runs and glides.

FISHING DESTINATIONS ON THE LAMMASPERÄ RAPIDS

Licences for white-water fishing on the Lammasperä rapids and the River Luulajanjoki: €15/24 hours, €40/week and €50/season.

The licence covers the Lammasperä rapids. The same licence also covers the rapids in the Luulajanjoki, starting from Pitkäkoski and extending upstream as far as Lake Niemisjärvi.

–  note: the fishing association has a cabin for hire on the banks of the Saunakoski rapid).

All year round, except the close season for brown trout from 1 September to 30 November.