The Luvanjoki water system joins the Emäjoki from the east in the very centre of Hyrynsalmi. With a length of more than 50 kilometres, this waterway has its origin near the Russian border, the waters flowing through a series of lakes — Mikitänjärvi, Luvanjärvi, Nuottijärvi and Salmijärvi — and several rivers and rapids. The most well-known rapid is the steep and beautiful Luvankoski. Another similar rapid is Nuottikoski on the downstream stretches. The waters downstream of Nuottikoski rapid are managed by the Salmi fishing association. The Kynäkoski eco-fishing area lies midway along the waterway, while waters upstream of Luvankoski rapid belong to the Moisio-Luva fishing association.

Downstream from Lake Nuottijärvi lies the Nuottikoski white-water fishing area, comprising three successive rapids with a combined length of approximately one kilometre. Nuottikoski rapid can be reached by turning off the main road 5 on to the Hyrynsalmi – Kuhmo road (road 904) and after 2.5km on to the Hakokylä road, from where the signpost leads to Nuottikoski. Further signposts direct the angler through farmyards in the small village of Pikkarainen to the lower stretches of the rapid.

The lower reaches by the angler’s car park consist of a smooth pool with leisurely flows and runs, making this highly potential rainbow trout water. The bridge crossing the the lower section means the rapid can be fished conveniently from either bank. Highly suitable for lure fishing, the lower section of Nuottikoski rapid is popular with anglers targeting rainbow trout, and a catch is almost guaranteed. Above the pool, Siltakoski rapid, and further upstream the Nuottikoski rapid proper, tumble down between steep cliffs. Strewn with boulders, the rapid provides plentiful pocket water where trout and grayling thrive, and a number of still coves favoured by rainbow trout. Upstream from Nuottikoski rapid the river flows in turbulent currents, above which is the swift water of the short Vääräkoski rapid. Summer cottages and saunas are located along the upper reaches, and their privacy should be respected. Two fire pits are available to anglers, one located next to the bridge, the other at the head of Siltakoski rapid in a location named after one of Finland’s former presidents and known as ‘Kekkosen vonkapaikka’.

A typical catch on Nuottikoski rapid is rainbow trout, weighing around one kilo. The fishing association stocks the rapid with rainbow trout in great numbers throughout the summer, providing the angler with an excellent opportunity of catching fish. Grayling are also frequently caught. The most coveted game fish on Nuottikoski rapid is the large lake-dwelling trout occurring in the Luva lake-and-river system and occasionally caught here. The record for trout on the rapid stands in excess of five kilos.

-A vending machine is located next to the Pikkarainen house along the road leading to the rapid. The machine is manually operated, with no change given.-Hardware store Rautia-Kemppainen in Hyrynsalmi (week and season licence).

The taking of trout is prohibited between 1 September and 30 November.

Three Rapids in One Trip 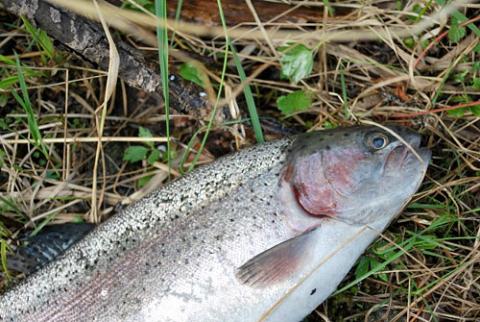 For some years now our circle of fishing friends have opened the season with a trip to Hyrynsalmi. We start in late May by fishing at three white-water destinations in…