The River Pajakkajoki is the confluence of waters originating in Kuhmo’s large lake and river waterways. In terms of water volume, the Pajakkajoki is the largest unharnessed river in Kainuu. The Pajakkajoki is important for migratory trout, and an interesting fishing destination. In order to strengthen its valuable natural fish stock, fishing on the river is developed in line with sustainable fishing. The Pajakkakoski rapid, located near the municipal centre of Kuhmo, is stocked with catchable-size fish, while the rest of the river holds only a natural fish population. Fishing spots on the lower reaches of the river can be accessed from the road leading to Saarikoski rapid.

PAJAKKAKOSKI
The entire northern shore of the Pajakkakoski rapid is flanked by an embankment which once served as a haulage structure for traditional tar boats. The embankment provides a platform for the angler –  even in ordinary shoes –  to lay casts covering all potential spots in the strong midstream currents with ease. The southern shore, more varied in character, demands more of the angler but provides more interest in return. There, the broken shoreline is dotted with boulders where fish find cover in the relatively still water. At night, even large fish that keep to the rapid’s midstream depths during the day move close to the boulders to feed. From its head all the way down to the pool below, Pajakkakoski has a number of spots where fish are ready to bite.

SAARIKOSKI
The wooded southern shore of the Saarikoski rapid is available to anglers along its entire length, with an adjacent car park.  An island and a rock reef split the rapid into two channels, the smaller of which flows along the southern side. Wading equipment is required for fishing the main channel and the midstream section. Fishing is possible from the northern bank, which normally has fewer anglers. Worthwhile fishing spots can be found on both sides, starting from the water around the boulders at the head of the rapid and extending down to the lower reaches. At times the side channel also holds good-size fish.

Stocked brown trout of more than one kilo are commonly caught in these waters, especially in Pajakkakoski. The fishing association has arranged for the adipose fins of hatchery fish to be removed, to enable anglers to take only stocked fish and release wild trout. Most sought-after are the lake-dwelling brown trout from Lake Ontojärvi, downstream from the rapids, which often weigh several kilos. New fishery management measures and the introduction of new regulations target restoration of the stock of large migratory fish. The Pajakkajoki also has a population of good-size grayling. When taking fish, anglers should be aware that grayling stock is a limited resource. In spring, for example, anglers will be expected to release all grayling to give them the chance to spawn.

The fishing regulations aim at protecting the valuable spawning fish and strengthen the natural fish stock. The entire length of Pajakkajoki is closed to fishing in mid-winter. Fishing is permitted from the beginning of April. Anglers should observe the prohibitions imposed on wading in the late winter, and use barbless, single hooks on their lures in the spring. In April and May all grayling must be released along the entire river.

The introduction of new regulations on the Pajakkajoki aims at strengthening the natural brown trout and grayling stocks. According to research, lake-dwelling brown trout spawns for the first time on reaching a length of around 60 centimetres. Anglers on the Pajakkakoski and Saarikoski rapids are encouraged to fish for stocked trout. These can be identified by their clipped-off adipose fin. Wild brown trout with an intact adipose fin are permitted to grow to a size of 60 centimetres, facilitating their natural reproduction.

The new regulations seek to provide as many anglers as possible with an opportunity for interesting white-water fishing.A bag limit of one trout applies on the rapid. This ensures a fairer distribution of catch among anglers, while also contributing to the chances of successful natural reproduction.

NO-FISHING ZONES AND RESTRICTIONS ON FISHING:
Fishing is prohibited in the side channel between the embankment running along the northern shore of Pajakkakoski rapid and the shore itself.Fishing is prohibited from the bridge across Pajakkakoski and from  boats anchored in the rapid.Beyond the rapid, the fishing licence entitles the angler to fish from a boat in an area extending downstream from Pajakkakoski as far as a line 100m upstream from the power line crossing the Akonkoski rapid, and in the area beween the Akonkoski and Saarikoski pools. 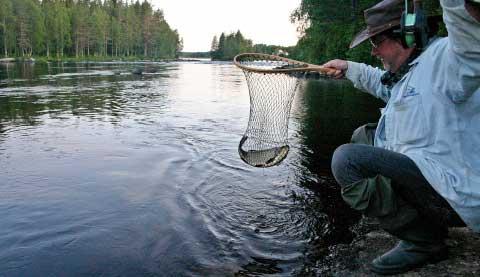 In mid-summer, sedge (caddis) imitations yield the largest catch. A sedge pupae fished immediately below the surface film is always a good first choice. During the day, a dry fly… 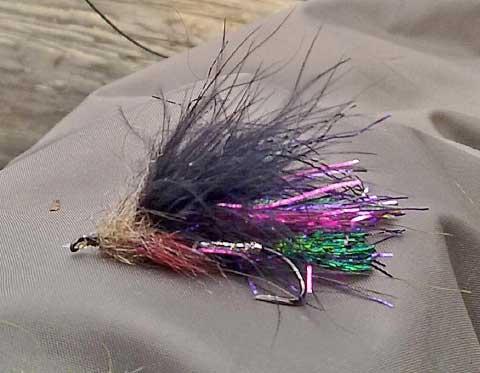