The Kalliojoki lake-and-river system is a spectacularly beautiful string of rapids and lakes in Kuhmo. This waterway originates near the Russian border, emptying ultimately into Lake Lentua. This is a joint-licence area consisting of all the river sections along the waterway, including those managed by Metsähallitus – a state enterprise administering state-owned land and water areas – and those communally held by the local fishing associations of Lentua. The licence covers 27 separate rapids with a combined length of more than 4 kilometres. Most rapids are easily accessible by road.

In former times, the Kalliojoki lake-and-river system represented the most important reproduction grounds for Lentua trout. However, as with so many others waterways in Finland, it was cleared for timber floating decades ago, resulting in a serious reduction in the trout population. From a fishery viewpoint, the rapids were restored to their former condition, with the last restoration project completed in 2011.

Today, grayling represents the most typical catch on the rapids, closely followed by trout. The waters are stocked with grayling and trout fry, and the rapids additionally with small quantities of catchable-size, hatchery-raised trout which have had their adipose fins clipped off.  A minimum size above that of catchable-size hatchery trout is set for the trout grown from fry or hatched from naturally produced eggs. This protects valuable, sexually mature fish from being caught prematurely.

The Pitkäkoski rapid, on the river section connecting Lake Sumsanjärvi and Lake Iso-Korpijärvi, is one of lowermost in the series of rapids along the waterway. These rapids can be reached by turning off the Lentiira road on to the road leading to Markenniemi. The slight difference in elevation results in water passing through Pitkäkoski rapid in a smooth run, cascading over a series of short falls. Pitkäkoski rapid runs for more than 200 metres, with further fishable stretches on the nearby Kattilakoski, Vääräkoski and Haapakoski rapids.

The Sumsankoski rapid lies in a stretch of river connecting Lake Sumsanjärvi and Lake Jokijärvi. This rapid is easily accessible from the road to Lentiira which actually crosses it. A rest stop lies adjacent to the rapid. Sumsankoski rapid is varied in character, containing both swift runs and deep and slow currents. Grayling from the rapid’s thriving grayling stock normally tightens the angler’s line, but trout are also caught. Abundant trees and shrubs mean the banks are difficult to walk. The rapid runs for a total of 250 metres.

The fly fishing area is located in a stretch of river connecting Lake Jokijärvi and Lake Kalliojärvi. This stretch comprises four separate rapids, Laukunkoski, Pystynkoski, Törmäkoski and Siltaniva, each more than 100 metres length. Special minimum sizes are applied in the area, with traditional fly fishing being the only allowable form of fishing. The lowermost rapids – Laukunkoski, Pystynkoski and Törmänkoski  –  are best reached by using the road to Lake Kalliojärvi. By contrast, access to Siltaniva rapid is via logging roads south of the river, with the road to Lake Kalliojärvi blocked by a locked barrier at Laukunkoski rapid. Of the rapids, Siltaniva has the weakest current, making it particularly well suited for grayling fishing.

The Nurronkoski and Poronkoski rapids are located on a stretch of river connecting Lake Kalliojärvi and Lake Juolunkajärvi. Both run for about 200 metres and offer interesting trout and grayling fishing. Poronkoski is one of the steepest rapids along the Kalliojoki lake-and-river system, while Nuorronkoski, further upstream, has a weaker flow. Nuorronkoski can be reached following a path which begins at the bridge across Poronkoski. The presence of buildings along Poronkoski restricts fishing, particularly in the rapid’s lower stretches.

The rapid at Kalastonkoski, located on a stretch of river connecting the Hoikka-Juolunka and Kalastonlampi lakes, tumbles over a series of ledges in the streambed. Bordered by lush forest, the rapid runs for 500 metres. The most typical catch is grayling, but trout is also hooked on occasion. A lean-to, outhouse, fire pit and firewood shed located on the rapids add to the enjoyment of angling. 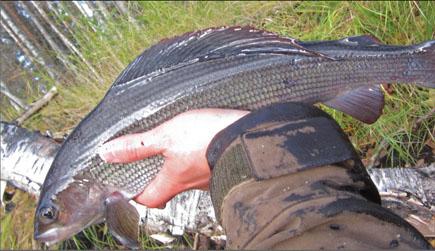 A denizen of the river, feeding at the edge of the current, made its presence known with an audible, boiling rise. I approached the site of the rise from downstream…