Flowing from its origins in the hills of Puolanka, the Kiiminkijoki drains into the Gulf of Bothnia north of Oulu. The Kiiminkijoki is an unharnessed, free flowing, 170-kilometre long river, and one of the water areas in Finland protected under the Project Aqua programme. The river has salmon and sea trout runs from the sea, while the local fish stock includes local standard species such as grayling, brown trout and pike. The joint lure fishing licence for the Kiiminkijoki covers the entire main channel, which begins from Lake Kivarinjärvi, lying north of Puolanka’s municipality centre. The spectacular Kalliuskoski rapid in Puolanka, also known as a tourist attraction, is a special fishing destination.

Apart from Kalliuskoski, Puolanka’s other attractions include Hepoköngäs, the highest waterfall in Finland. This 24-metre high waterfall is located in Kiiminkijoki’s headwaters. 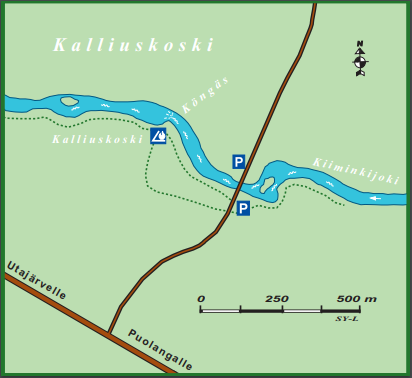 Kalliuskoski rapid is located on the Kiiminkijoki, around ten kilometres downstream from Lake Kivarinjärvi. This impressive special fishing destination lies within easy reach. From the road to Utajärvi, just 15 kilometres from Puolanka’s municipality centre, clear signs lead to a car park beside the river. Lean-tos and regularly maintained fire pits are located by the steepest sections. Not only a fishing spot, this beautiful location is ideal for a family summer outing. Thundering through the forest, this rapid is around 15m wide and easily fishable from both banks thanks to a bridge crossing the river in the middle section. Kalliuskoski begins several hundred metres upstream from the bridge. The winding first sections are highly suitable for fishing, providing comfortable lies for both stocked fish and local grayling. Downstream from the bridge, at the midpoint, a metre-high waterfall tumbles over a ledge. This waterfall, and the deep hole beneath it, causes even sea-run fish to halt for a while on their journey upstream. Downstream from the waterfall lie two smaller ledges, beyond which the rapids continue for several hundred metres in a varied succession of strong riffles.

The Kalliuskoski rapid in Puolanka is a special fishing destination in the Kiiminkijoki’s upper reaches. The designation ‘special fishing destination’ means that Kalliuskoski is stocked with catchable-size brown trout several times during the summer. The most common catch on the rapid is brown trout in excess of one kilo. The rapid also holds a healthy grayling stock. The most coveted catch on the Kiiminkijoki is sea-run fish occurring along the entire main channel of the river. Especially when water levels are high, large two-to four-kilo sea trout run up the river as far as Kalliuskoski and other rapids in Puolanka. Anglers should also bear in mind the chance of catching sea-run salmon on the Kiiminkijoki. In addition to catchable-size fish, the Kiiminkijoki is stocked in large numbers with trout and salmon juveniles, ready to start their downstream migration towards the sea.  Anglers should avoid targeting these juveniles. The use of barbless hooks, releasing accidentally caught fish without lifting them out of the water and  handling fish with wet hands all help to improve the survival rate of fish.

OTHER RAPIDS ALONG THE KIIMINKIJOKI’S UPPER REACHES

The uppermost rapids in the Kiiminkijoki’s main channel

The Kiiminkijoki is an excellent paddling route that combines fishing with canoeing in a natural way. The paddling angler is within comfortable reach of the peaceful sections of the river, less frequented by anglers than the special fishing destinations. On sections where the river forms pools, the angler may catch pike and perch. Along its full length of 170 kilometres the Kiiminkijoki has a total of 70 separate rapids. In the upper reaches, especially in Puolanka, the river flows through sections of wilderness, while farms and fields dot the landscape of the lower sections. Paddling trips can be either self-directed of guided. The Kiiminkijoki touring, fishing and canoeing guide contains basic information on the river’s rapids. Tourist businesses, for example in Puolanka, rent paddling gear and, on agreement, provide assistance with its transport.

€10/24 hours, €20/week, €45/season. The price for a family licence is double that for an individual adult. Children under 12 years of age require no licence. Group licences are sold for 24-hour periods only.

The licence covers the Kiiminkijoki’s entire main channel from Lake Kivarijärvi as far as the sea.

Maximum two salmon or trout/24 hours. When fishing with a rod (lure or fly),the entire length of the river is closed to salmon and trout fishing from 1 September to 30 November.  Fishing for salmonoids using a worm bait is prohibited.

For further information, please contact: A touring, fishing and canoeing guide contains a map of the river, including rapids, and recommendations for paddling routes. The guide is available free of charge at www.kiiminkijoki.fi.