The waterway of the Kutujoki and Tervajoki rivers. This waterway drains into Lake Oulujärvi through Lake Otermajärvi and the River Kutujoki. The Aittokoski rapid on the Kutujoki passes under the Kajaani-Oulu road (main road 22) about two kilometres west of the Vaala municipality centre.  The Kuitujoki’s white-water fishing area begins at Lake Otermajärvi and terminates at Lake Järvenjärvi, also known as Lake Yläjärvi. The licence of the Kutjujoki fishing association allows anglers to fish a continuous stretch of river extending to 15 kilometres, excluding the no fishing area at the Petäjäskoski rapid. Belonging to the headwaters of this waterway, the Tervajoki flows through forest and has several brook-like stretches suitable for hiking anglers. The Tervajoki is covered by the Oterma fishing association licence.

The Kutujoki is normally accessed along its western banks. A logging road leading to the upper reaches through the Petäjäkoski rapid leads from the Kajaani-Oulu road, only about two hundred metres west of the bridge crossing the Autiokoski rapid. Maps and information boards have been put up along this road for the benefit of anglers. A lean-to stands by the Monisaarisenkoski rapid, and and another at the Myllykoski rapid in the uppermost reaches. Fire pits are available every few kilometres, with as many as four footbridges crossing the river. In its upper reaches this forest river flows in a narrow channel for seven kilometres, creating an almost continuous, fast-flowing rapid. The river has a total of 15 separate rapids for which names have been given. In its middle section, downstream from the Petäjäkoski rapid, the river becomes calmer, flowing in long pools or runs and churning up only at the Taimeroisenkoski rapid in the middle reaches.

The Kutujoki is five to ten metres wide and suitable for fishing with a light spinning or fly-fishing rod. The most popular fishing spots are located around the Monisaarisenkoski rapid in the river’s upper reaches. Anglers prepared to shoulder a rucksack and do some hiking away from the logging roads will find peaceful sections along the course of this long wilderness river under little fishing pressure. An even better method of reaching the peaceful fishing spots is by paddling down the river in a canoe.

A common catch on the Kutujoki is rainbow trout or brown trout of around one kilo. The fair chance of catching a fish here is based on the stocking of catchable-size rainbow trout and brown trout, carried out by the fishing association several times in the summer.  Of the natural fish stock, grayling is the most common catch. Grayling in the river have a high reproduction rate and grow to respectable sizes. Trout also reproduce in the Kutujoki, and large specimens from Lake Oulujärvi or Lake Oltermajärvi form part of the catch now and again. In addition to catchable-size fish, the river is occasionally stocked with trout and grayling fry. Salmon fry are also stocked as part of the projected fishways along the River Oulujoki. Pools hold pike, perch and other species.

Bag limit 3 brown trout or rainbow trout/24 hours. About 1-kilometre long no-fishing zone on the Petäjäskoski rapid. Restrictions on fishing: Fishing only with lure and fly. Fishing using dough bait or similar bait is prohibited in the Kutujoki fishing area.

From 12 noon on the last Saturday in May until 12 midnight on 31 August.

Several Trout and a Rainbow on the River Kutujoki 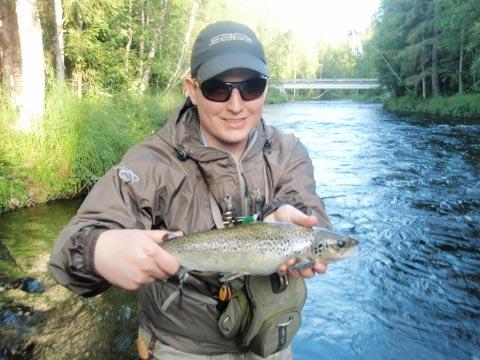 In early July, Joonas and I set out on a trip from Oulu, planning to do some evening fishing on the River Kutujoki I had visited less than a week…