Signposts direct the angler to Suolijärvi village from both the Puolanka–Taivalkoski road (road 800), around 30 kilometres north of Puolanka,  and from the Siivikko–Näljänkä road (road 8390). Suolijärvi, a beautiful village which is still inhabited, is located between the provinces of Kainuu and Northern Ostrobothnia, with most of its houses strung along the Suolijoki. The spectacular Siikavaara hill and other hills in the area’s nature reserve separate the two provinces, leaving this peaceful area with its  natural beauty untouched by major traffic arteries. 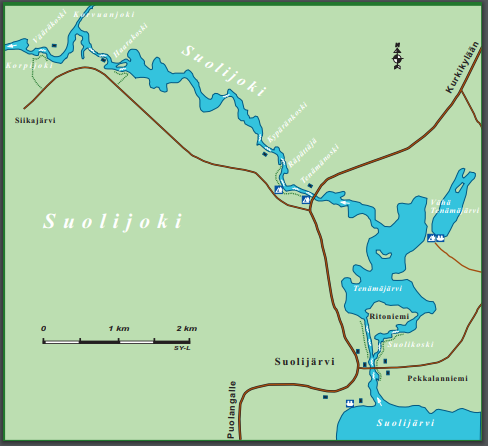 The rapids at Suolijärvi  belong to the licence area of the Suolijärvi fishing association. However, this area is not included in the Korvua-Näljänkäjoki area, which is covered by a joint licence. The Kattilakoski rapid is the uppermost in this area, located in the lower reaches of the Näljänkäjoki, and separate from the other rapids. The first section of the road to Kattilakoski runs across a large field, after which there is a car park and a footpath leading to the rapid. A lean-to for anglers stands on a point jutting into the water halfway down the winding rapid.

The Suolikoski rapid begins from Lake Suolijärvi and drains into Lake Tenämäjärvi. At the foot of the rapid a large island splits the water, one part flowing in an old, winding channel and the other along a straighter course. The straight section has also been restored with boulders, and today potential fish lies can be found in both channels. The island can be reached only by wading. Although the Suolikoski rapid runs past a village of the same name, both banks are open to fishing provided that anglers respect the privacy of the few houses located near the bridge.

The Tenämänkoski and Räpättäjä rapids form the next white-water stretch  after Lake Tenämänjärvi. This stretch is the most popular area for white-water fishing on the Suolijoki. A large car park and lean-to are located by the bridge. Beyond the the bridge, the river flows in a series of winding rapids and swift currents providing fishing grounds along the entire length of this reach. The Tenämänkoski rapid is located conveniently near the road, and the forested southern bank provides pleasant fishing opportunities. The lean-to at Räpättäjä stands at the midpoint of the southern bank. Beyond the rapids the river runs into a flowing pool, followed by the Kypäräkoski rapid around two hundred metres further downstream. The middle reaches of the Suolijoki consist mostly of pools interspersed with a number of short runs.

Beyond Lake Mojovanjärvi is the start of the Haarakoski rapid. The southern bank is a private area belonging to the farmhouse there and is not included in the licence. The swift-flowing upper section is known as Majovakoski. This is followed by a deep pool, after which the Haarakoski rapid proper begins.

The lowermost rapid in the Suolijoki area is called Vääräkoski. This is located on the Korpijoki, downstream from where it joins the Korvuanjoki flowing from the north. Vääräkoski’s southern bank is forested and can be fished with the same licence. As the Suolijoki is around 20 metres wide, not all its fishing grounds can be fished from one bank at high water levels. The Suolijoki’s rapids are rocky and difficult to wade in some places.

A healthy grayling population thrives in the Suolijoki’s rapids and currents. On occasion, the river’s record-size grayling have earned their catchers first prizes in provincial fishing competitions. Trout of around one kilo are also frequently caught, especially on the rapids closest to Lake Suolijärvi. Natural-stock trout are less common in the catch than grayling, and most trout caught are hatchery fish stocked by the fishing association. Cleared for timber floating in the past, work to restore the Suolijoki rapids to their original condition was carried out around the turn of the millennium. Rehabilitation targets restoration of the river’s natural fish stock. For a period of around ten years, fishing on the Suolijoki’s Haarakoski rapid was regulated according to eco-rapids principles. This project demonstrated that both the number and average size of grayling can be significantly increased in the area’s rivers through regulation.

€10/24 hours, €30/week and €50/season. The licence covers the river and lake waters from below the Kiehtäjäkoski rapid as far as Vääräkoski rapid on the Korpijoki. A private water area along the southern bank of Haarakoski rapid is excluded from the licence (this area is not part of the Näljänkäjoki area, covered by a joint fishing licence).

Between 1 June and 10 September. (The taking of trout is prohibited between 1 September and 30 November) 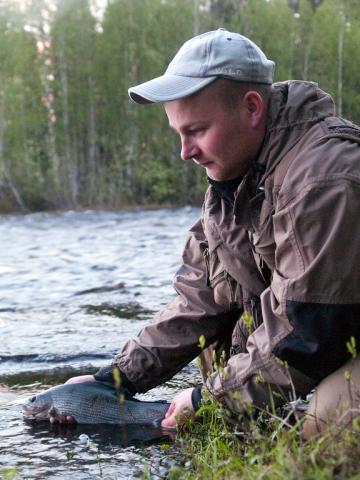 We sat down at the Haarakoski lean-to shelter, to take a break and to think. The river was in spate, typical of the first days of June, washing the bushes…