The Kongasjoki waterway flows west of Paltamo through Lake Kivesjärvi. This waterway, draining into Lake Oulujärvi, is traditionally known for holding migratory fish. The Varisjoki, beginning from Lake Kivesjärvi, is the outlet river of this waterway, and the most significant unharnessed trout-bearing river flowing into Lake Oulujärvi. The Kongasjoki and the brook-like Vaarainjoki empty into Lake Kivesjärvi.  The Kongasjoki is the bigger of the two, its headwater located as far away as Puolanka, north of Lake Osmankajärvi and Lake Kongasjärvi. The Varisjoki and most of the Kongasjoki are covered by the same fishing licence, which entitles the angler to fish dozens of rapids located across a wide area. This area is easy to reach, with the Kongasjoki passing under the Kajaani–Oulu road (main road 22) at Kivesjärvi and the Varisjoki under the road to Manamansalo at Hakasuo.

Beginning in Lake Kirvesjärvi, the roughly three-kilometre long Varisjoki drains into Lake Oulujärvi through three separate rapids. Of these, the Ruukinmyllynkoski in the upper reaches, in Hakasuo village, is the most easily accessible. Hakasuo mill is of local historic interest, and its front yard with space for cars a suitable halting place for anglers. A fish hatchery and research facility of the Finnish Game and Fishery Research Institute are located in the vicinity of the mill, on the northern bank. The bank is closed to fishing in the area of the research facility.  The southern bank can be fished along its entire length, traced by anglers’ footpaths and, winding through the forest, a nature trail cleared by the committee for village activities. The river, flowing through a stand of tall spruce, is around ten metres wide and fishable from one bank. Light spinning or fly-fishing rods are suitable fishing gear for these waters. Slowly flowing pools lie between the rapids, and anglers wishing to head directly for the lower rapids can do so by using the road south of the river leading to Varisniemi. A signpost marks the beginning of a path leading to the Hotellikoski rapid. This steep rapid rushes down in the middle section of the river and is crossed by a footbridge. The lowermost rapid is called Myllykoski, and drains into Lake Oulunjärvi. A hut stands on the southern shore of the lake at the point where the Varisjoki enters. Known by its local name ‘Piilopirtti’, the hut is open to anglers and boaters. Here there is a ‘kota’ grill, boat harbour and boat ramp. A public path leads directly to the Hotellikoski rapid, while ‘Piilopirtti’ is served by a public road. Anglers should generally take account of the private summer cottages in the area. The remains of an old iron works can still be seen along the path to Hotellikoski. Flying squirrels and many owl and falcon species thrive in the stands of old spruce. The special characteristics of the local flora and geology are described on the boards found along the nature trail.

The Varisjoki is the most significant of the unharnessed trout rivers draining into Lake Oulujärvi, or, as it is otherwise known, the ‘Kainuu Sea’. Consequently, the river at times yields good-size lake-dwelling trout. Land-locked salmon are also caught on the Varisjoki. The most common catch on the rapids is  stocked brown trout in excess of one kilo.  The Varisjoki is stocked with catchable-size trout several times during the season. Much to the delight of fly fishers, the river holds a healthy grayling population, while whitefish also occasionally enter. Anglers should be aware the catch may include many juveniles originating from migratory populations. Some of these are connected with research projects carried out by the Finnish Game and Fisheries Institute, aimed at restoring migratory fish stocks in the Kainuu waterways. Anglers should therefore refrain from unnecessary hooking of juvenile fish.  Using barbless hooks, releasing fish without lifting them out of the water and handling fish with wet hands all help to improve the survival rate of juvenile fish. 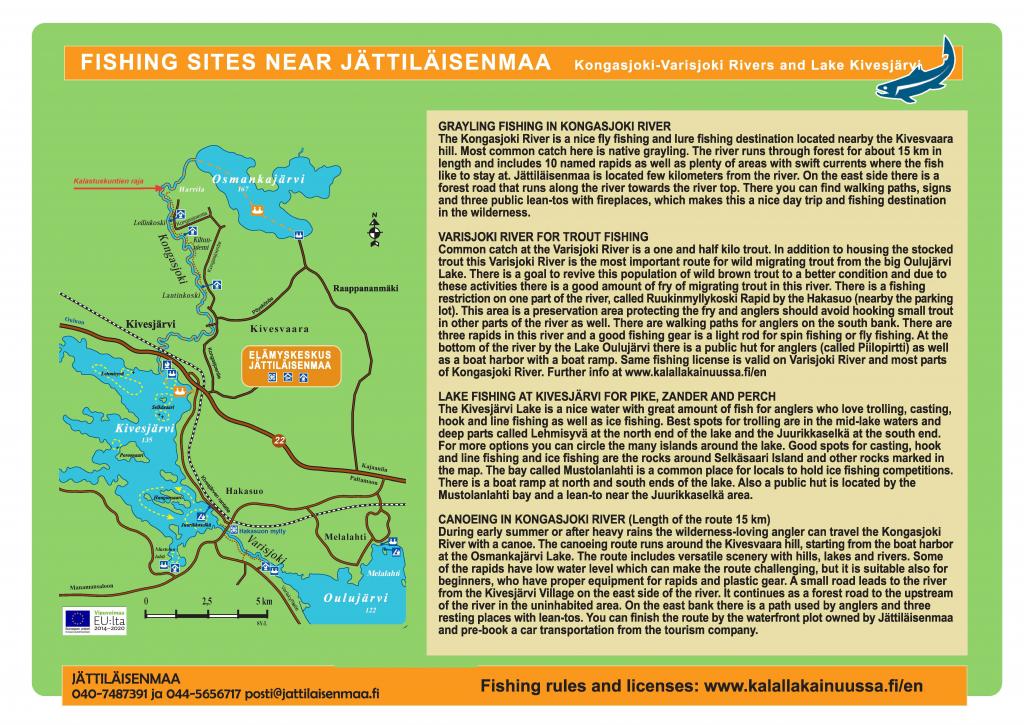 Services: A hut in the lower reaches, open to anglers

€15/24 hours, €25/week and €50/season. Children under 12 years of age in adult company may fish free of charge. The licence covers the Varisjoki, the Vaarainjoki and most of the Kongasjoki as far as the boundary line between fishing associations at Harrila.

Fishing on the river area permitted with lures and flies only.

Each angler is permitted to take two fish per 24 hours.