The first rapids suitable for white-water fishing along the Kellojärvi waterway are located on the River Vuosanganjoki, which flows through forested country in Vuosanka, north of Lake Kuivajärvi. These form part of a state-owned water area and require a Metsähallitus lure fishing licence. The tumbling rapids at the northern and southern tip of the ten-kilometre-long Lake Kellojärvi belong to the Vieksi fishing association. The Hiidenkoski rapid flows from the north into Lake Kellojärvi at Koskenmäki village. At the southern end, the waters continue downstream as the Konapinkoski rapid. Further downstream towards the fishing association boundary lies a stretch of swift currents known as Sahinniska.

In Ala-Vieksi, at the southern end of Lake Kellojärvi, the Konapinkoski rapid flows through a wooded isthmus between Lake Kellojärvi and Lake Murtojärvi. These rapids are located beside a road connecting Kuhmo and Sotkamo (Pohjoispuolentie road, or road 900), about 27km from Kuhmo. Konapinkoski can be reached by turning north at the sparsely inhabited village of Ala-Vieksi on to the narrow Heikinniementie road (at Pohjoispuolentie 2872) and following it for about two hundred metres. At the head of Konapinkoski, waters are sucked down through two parallel tongues — v-shaped stretches of water just above the rapid — into a stretch of choppy water. Halfway down, the channel becomes narrower and steeper, with the water rushing from here to the end of the rapid. A rock embankment, partly broken, runs two metres from the southern bank and extends the entire length of the rapid. This embankment divides the rapid into a main and a side channel. Konapinkoski can be fished easily by walking along the embankment. However, the angler looming high above the water is also likely to scare fish out into the deep water of the lake. The bank opposite the straight embankment is more varied and contains pockets providing cover for the fish. The relatively deep section at the head of the rapid and lower reaches, extending deep into the lake, also makes for potential fish-holding water.

The tumbling Hiidenkoski rapid joins Lake Kuivajärvi to Lake Korpijärvi — itself part of the upper reaches of Lake Kellojärvi — near the village of Ylä-Vieksi. The rapid passes under a road connecting Kuhmo and Sotkamo (road 904) at the address Hyrynsalmentie 1716 in this sparsely populated village. A village shop stands beside the bridge. A lean-to is situated near the head of Hiidenkoski, on the lake shore, and an old bridge crosses the upper section of the rapid. Hiidenkoski, a longer rapid than Konapinkoski,  has been restored by removing the embankments and restoring boulders to the riverbed. The rapid is unbroken, beginning immediately its waters exit Lake Kuivajärvi and running between steep banks and under both bridges all the way to the waters of the main lake of Kellojärvi. In the upper stretches, anglers will find they have the forested banks all to themselves. Although account should be taken of the houses in the lower reaches, the entire length of the western bank is available for fishing. Hiidenkoski is only 5 to 15 metres in width, enabling the angler to cover its fishing spots easily from one bank. 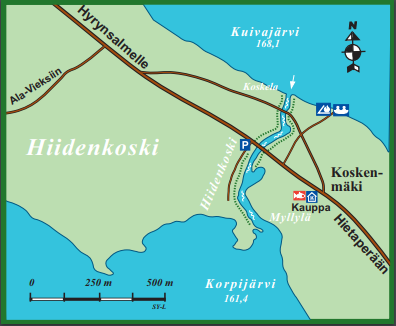 Trout dwelling in lakes move occasionally to the rapids at Konapinkoski and Hiidenkoski to feed. At times, fish can be found along the entire length of the rapids, though at other times these appear entirely devoid of fish with trout having moved back to the lakes. In addition to trout, these rapids hold a good-size grayling population. Hiidenkoski and Konappikoski rapids, located at the northern and southern ends of Lake Kellojärvi, respectively, are fairly similar with regard to their fish stock. The fishing association has stocked the rapids with trout and grayling fry and made efforts to preserve the natural fish population. The latest in the series of such measures is the restoration of spawning grounds and fry nursery areas in the rapids at either end of Lake Kellojärvi, aimed at strengthening the natural reproduction of fish.  Anglers are obliged to release all fish below statutory minimum size, to give them the chance of growing and reproducing.

INFORMATION ON THE FISHING AREA:

For white-water fishing in Lake Kellojärvi: €8/24 hours; €20/week; €40/season. (The same fishing licence is valid for both Konapinkoski and Hiidenkoski)

All year round, except for the close season for brown trout from 1 September to 30 November.