The maps below show excellent fishing grounds, with red referring to mostly pike and green to mostly zander! 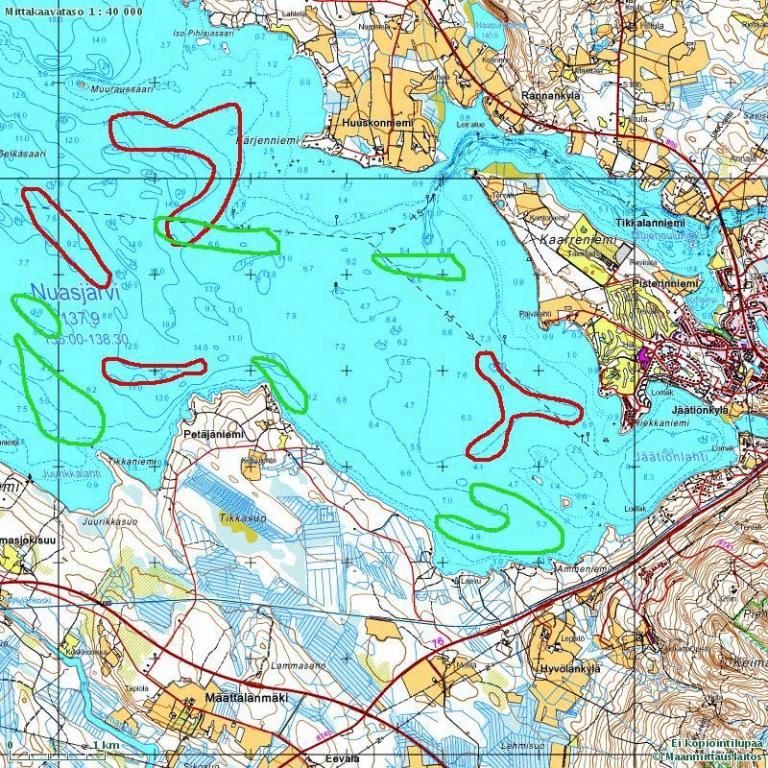 Lake Nuasjärvi, located at the foot of the Vuokatinvaara eskers, provides an incomparable setting for tourism and a stunning backdrop for troll fishing. Reserve several days for your fishing trip, because this lake is large and has an abundant fish stock. Several boat ramps are located around the lake. The Katinkulta ramp is located in Jäätiönlahti Bay, which incidentally is one of the spawning areas for zander and pike in Lake Nuasjärvi’s eastern margins. The next ramp is located on River Mujethoulu, in the Naapurinvaara Holiday Village, right next to the Naapurinvaara boat harbour. This is where I start from when I want to fish the eastern side of Lake Nuasjärvi, which is rich in zander. In spring, it’s worth concentrating around the mouth of Jäätiönlahti Bay, but in summer and autumn you’ll find it more productive out in the middle, between Petäjäniemi Point and Kärjenniemi Point. Large zander catches are frequent in this part of the lake, and a large pike not uncommon. Like so many others, I took my first 10-kilo pike here. 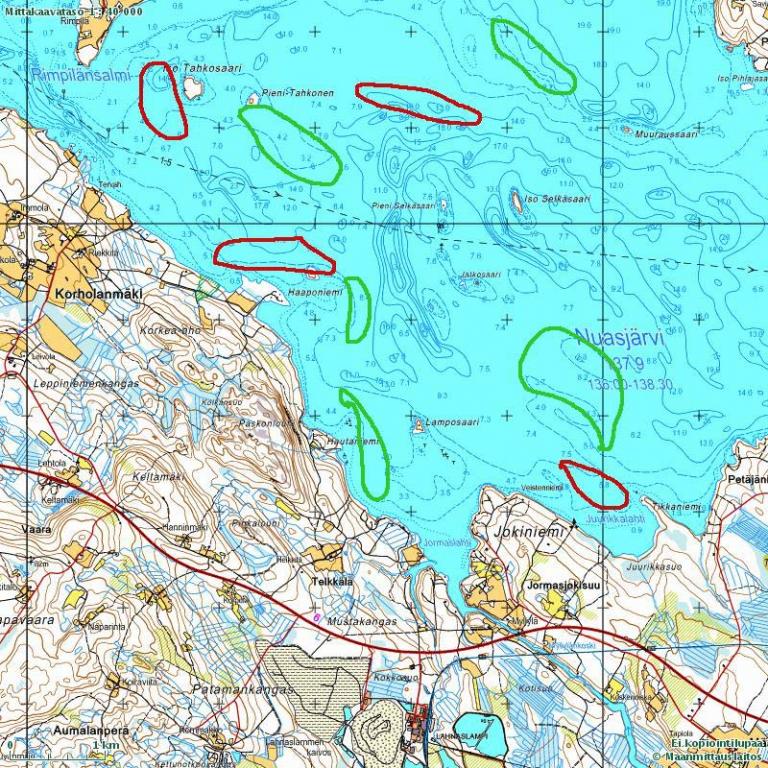 The best way to the mouth of the River Jormasjoki and surrounding waters is from a boat ramp at Korholanmäki, where you’ll also find a lean-to. True, it’s not far from Vuokatti either, provided there’s no strong wind on the lake to kick up a dangerous chop in those wide open expanses. In spring, fish normally holding in the deeper areas gather at the mouth of the river to spawn.  The river’s mouth is naturally teeming with zander in spring, but later in the summer they’ll move to shoals further out in the lake. Catching fish in these areas is pretty easy as long as you tie on a wobbler of around 12 to 15cm and the colour of smoked vendace. As this is sport fishing you should be prepared for any eventuality, including coming home empty-handed from an angler’s paradise!

While the northern end of Lake Nuasjärvi mostly holds pike, you might also catch the occasional zander. In spring, fish will run up to Iivonlahti and Konapanlahti bays to spawn, so finding fish is easy in the early fishing season. In summer, though, unlike fish in other parts, these will head for deeper waters. I would recommend really forcing the lure down here, as deep as eight metres, compared to the six metres in other spots. Here, in the northern reaches of the lake, the best choice is a green-coloured lure. 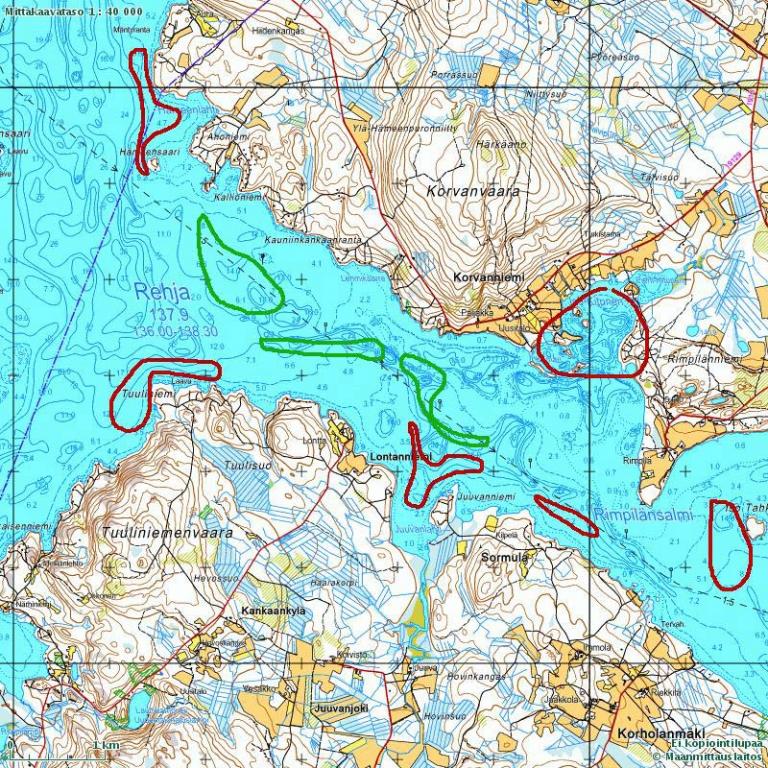 A strait called Rimpilänsalmi divides Lake Nuasjärvi into two halves. The eastern half belongs to Sotkamo, and is generally referred to as Lake Nuasjärvi, while the western section, although technically part of the same lake, is mostly known locally as Lake Rehja. As regards sport fishing, this strait is deep with steeply sloping banks. The Rimpilänsalmi strait, particularly towards Lake Rehja, is regarded as the best trout fishing area in Sotkamo. The bottom of a small bay ─ Pikku-Kitunen ─ north of Rimpilänsalmi has a legendary reputation as a springtime spawning ground for pike. In spring, pike in the bay are plentiful, with many staying behind after the spawn is over. The angler could do worse than pointing the bow towards Pikku-Kitunen, although shallow water makes getting there difficult. It will certainly be worth it, though, even if only for the spectacular scenery. 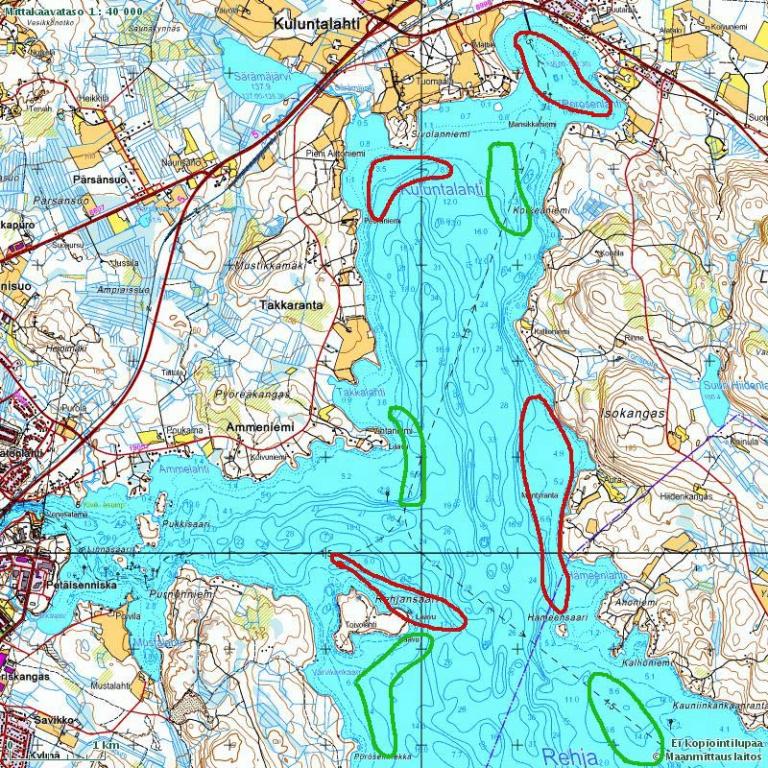