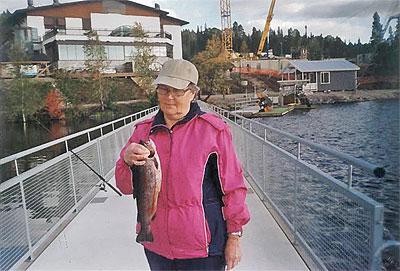 Here, one can truly say, there are fish. Stocked rainbow trout, and other fish, too. Well-managed, but with surprisingly few anglers. In some years we’ve logged nearly ten fishing trips to Ukkohalla in our fishing journal, many bringing good catches.

On a trip to Ukkohalla last August, Kirsti caught a 3-kilo rainbow trout. She had a bit of luck: with no landing net to hand, and her husband ─ that’s me ─ on the other side of the lake, she managed to pull the fish on to the bank and grab hold of it.

In the same trip we caught 16 large perch, six weighing in at around 1 kilo and the rest at  600─700 grammes. The perch caught us by surprise. It was a hot August day. My wife let out a yell when she caught the first one, shouting at me to come over.

And now a few words about a large whitefish I caught completely by chance when ice fishing. It was a November day, with the dusk setting in. We we fishing on the northern side of the lake. I told Kirsi I’d go and measure the depth of the water on the opposite side. We’d never done any ice fishing over there before. I dropped my lure in the hole. A fish took it but didn’t hook itself. I dropped the lure again and instantly got a bite. I thought it was a rainbow trout at first, but once on the ice it turned into a whitefish. Although we’d never caught whitefish before, this one weighed a hefty 1.6 kilos.