This lake system gathering its waters in the Änättijärvi, Lentiira and Iivantiira lakes in the northern corner of Kuhmo empty through the Niva rapids into Lake Lentua. Signposts leading to Niva village can be found by following the northbound road from Kuhmo towards Moisionvaara for about 30 kilometres. A fishing licence vending machine and information board are located at the junction of Nivatie and Kaarneentie roads in the centre of the village. The village has car parks available to anglers, and footpaths leading to the rapids are marked with signposts. Anglers should take heed of the signs, as there are fish-raising pools along the banks and a number of houses beside the rapids. Anglers are welcome in the village. For example, the committee for activities in Niva village has devised a network of nature trails in the area of the rapids, including a number of lean-tos which are maintained. There is some water traffic between the major lakes. Along the paddling route from Lake Lentiira, the uppermost reaches of the Niva rapids and the Vuolteenkoski rapid are easy to shoot but Kaarneenkoski is too steep. However, Kaarnekoski can be bypassed by using a boat track. Niva village has an idyllic atmosphere. The maze-like lakes and the rapids connecting them wind through verdant, rural landscape, providing pleasant scenery. 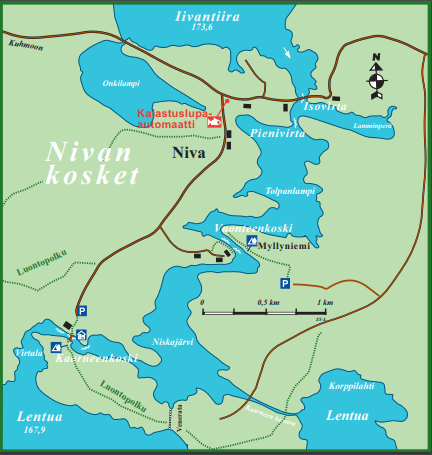 On arriving at Niva village, many anglers drive along the Nivantie road up to the bridge that crosses the Isonvirta rapid, to check the water levels and to take stock of the river. Sometimes large trout can be spotted under the bridge, but usually any indication of movement on the bridge sends them into hiding. Isovirta and Pienivirta, around two hundred metres further down, are not so much rapids as sections with a swift current. Large fish may be yielded, however, at an opportune moment. Fish mostly hold in pools, moving into the swift currents only to feed.

The eastern shore of Vuonteenkoski rapid is graced by an old, restored mill, while the western shore is flanked by an embankment used for boat haulage. The western bank where most anglers fish is easily accessible from the Kaarneentie road. Moving about on the embankment is easy enough for the angler to manage even without boots. The unpopulated eastern bank is thick forest, with a more varied shoreline and a lean-to at the tail of the rapid, where the waters empty into a pool. The eastern bank can be reached by car along the Nivantie road, crossing the bridge across the Isovirta rapid and finally turning right on to a logging road (Halkoahontie). Here signposts direct to a car park and to a footpath leading to the lean-to on Vuonteenkoski rapid. The most popular fishing spots on Vuonteenkoski are located at the head of the rapid where the water picks up speed, and the tail section where the waters tumble down into a river-like lake. The rapid proper flows in a straight channel, the deeper holes where fish thrive being located along the eastern bank.

The Kaarneentie road ends near houses on the banks of the Kaarneenkoski rapid. There is also a car park for anglers. A bridge crosses the rapid over the middle section. A lean-to, woodshed and outhouse stand in the forest on the opposite bank, while a nature trail winds its way through the area. As a fishing spot, Kaarneenkoski is more varied than Vuonteenkoski. At the upper end of the rapid the water flows in swift currents, curving into a wide pool where the water flow is milder. By the old timber floating structures, the pool is squeezed into a narrow section where it forms the head of the next section of rapids, a popular fishing spot for trout anglers. The rapid itself, though steep, with strong currents, is full of deep holes and side currents where trout thrive. The largest fish are normally caught at the tail of the rapids and in the pool flowing below it.   The Niva villagers are well accustomed to anglers, always numerous on these rapids because of their plentiful fish. Although a number of houses line the shores of the Niva rapids, all fishing spots can be fished from both banks. The rapids can be fished in both summer and winter.

The Niva rapids are a highly potential feeding ground for lake-dwelling brown trout. Located between Lake Iivantiira and Lake Lentua, these short rapids are known for their bountiful brown trout catches. The high probability of a catch on the Niva rapids is based on regular and plentiful stocking of catchable-size trout by the fishing association. The waters are also stocked with trout fry, obtained from local fish farmers. Grayling are also caught, thanks to the self-reproducing grayling population. Occasionally, anglers catch rainbow trout that have escaped from fish farms. Fishing is also possible in winter as the Niva rapids remain unfrozen.